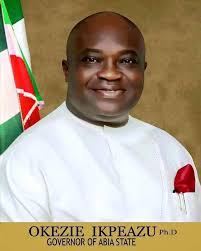 A mad man have called out
the Abia state governor Okezie Ikpeazu for mismanagement of the state resources
with the Speaker of House of Assembly in the State.


The trending video shows
the man, who is without a shirt, but definitely communicates in fluent English,
lament the alleged poor governance by the Abia state governor. According to the
alleged ‘mad man, whenever theirs is rainfall the people of Aba in Abia state
is gripped with high blood pressure due to the fear of erosion menace as it is
the tradition of Aba to overflow with flood due to poor sanitation and drainage
system. He called Okezie thief for squandering the state resources.