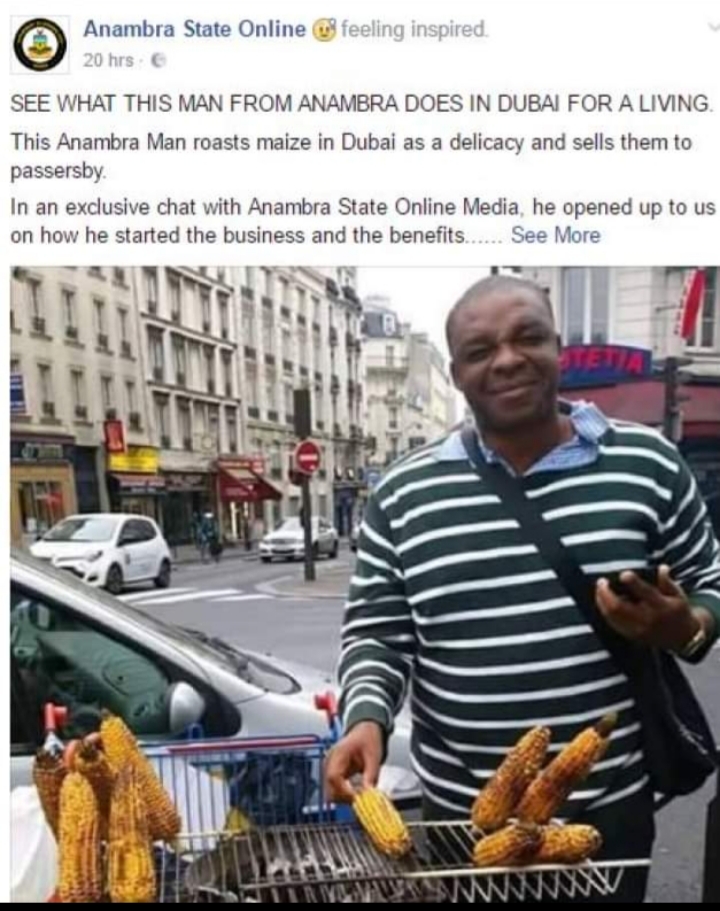 Nigerian man who roasts corn in Dubai for a living tells his story.

According to a post on Anambra State Online Facebook wall, Obinna, a citizen of the state, moved to Dubai and after his efforts to hook a job failed, he decided to start selling roasted corn for a living.
Mr. Obinna revealed how it all started.

“My name is Obinna. I am from Njikoka in Anambra State, when I arrived in Dubai and couldn’t find a job, so I decided to think about what to do to make a living.
One day, while I was in a local restaurant, a man came in and placed an order. When the waiter came with the order, it was Chicken With Mashed Potato and Grilled Corn but the corn was not roasted in the Nigerian way as we do it with coals.
“That was when the idea came and I decided to give it a try. I contacted a local farmer who supplied me with raw corns and I started roasting them close to my neighbourhood across the street.
“At first, people who passed by looked at me with curiosity as they had never seen anything of its kind up until one man approached me and I gave him one corn cob to taste.
On eating it, he liked it and the following day, he came with 4 of his friends who bought and even took some home.”
Now I’m making about 60 to 80 Dirham (22$USD)(N8,000) daily.”, he said.