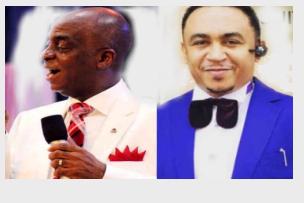 DEAR NIGERIAN TITHE PAYING CHRISTIANS, GOD IS NOT IN NIGERIA, AND YOUR TITHING IS PUSHING GOD FURTHER AWAY!….

Bill and Melinda Gates have spent over $28Billion, that’s over 27% of their current net worth on charity. No, they did NOT pay this money as tithe, they invested it into the lives of some of the poorest people on earth. Their major focus has been to improve global health.

Bill Gates has ONE private Jet worth $50Million. He could have used his $28Billion to acquire more than a hundred more private Jets. But he is not a Nigerian pastor. Himself and wife who are obviously not as “smart” as some pastors in one poor country like that in west Africa have decided to spend so much Billions helping poor people around the world.

There’s no record of Bill Gates paying tithe. So, he will still go to hell fire anyway. Because he is supposed to dash the $28Billion to RICH pastors as his tithe, offering and seed faith, even though thousands of humans on earth starve to death per minute.

Mark Zuckerberg is the CEO, and owner of Facebook. He is the fifth richest man. Mark is an atheist.

Mark and Pricilia, his wife have spent and still spending Billions on Charity work.
The Chan-Zuckerberg foundation has empowered and is still empowering very many poor people, young entrepreneurs and the almost hopeless in the society.

Mark and Pricilia have pledged to donate 99% all their worth to charity and improving lives? They should have paid it as tithe. Those hungry dying children can die or wait till our pastors acquire more private jets.

But Mark doesn’t even believe in God talk less of tithing. Thus, according to the Nigerian Christians, Mark will burn in hell.

These two men are amongst the five richest and most successful people on earth, and amongst the most philanthropic persons the world has ever known. They made Billions of dollars, and they have decided to spend their lives, time, money and resources trying to better the lives of humans and make the world a better place.

Most of the most philanthropic people on earth do NOT pay tithe. They reach out directly to the poor, needy and less privileged, and helping to make the world a better place.

However, somewhere in Nigeria, a country where an alarming percentage survive on a dollar a day, a rich man just spent about a billion Naira building another church for a rich pastor who owns four private jets.

Do you know what a billion Naira would do in the lives of a thousand youths? We cry about unemployment, but do you know how many unemployed persons would be employed in a Billion Naira company? Well, what are we saying? These are same unemployed Christian youths who would vehemently argue that it is wiser to sow a Billion dollars into the life of a stinking rich pastor than it is to use it to build a Billion Naira company that would employ hundreds of them and rescue them from abject poverty.

Well, what am I even saying sef? Somewhere in Nigeria, a poor student whose widowed mother struggled to provide her N100k for her Polytechnic tuition fees and accommodation has just used her school fees to sow a seed in the life of her jerry curl Daddy GO who is worth over $49Billion.

Somewhere in Nigeria, a pastor with FOUR PRIVATE jets is still asking his members, majority of whom are living in abject poverty to donate money and sow seeds into his life. I mean, those private jets won’t maintain themselves, and the fifth private jet won’t buy itself.

Somewhere in Nigeria, one poor man has just sowed his car which he uses for taxi into the life of his stinking rich pastor. His family will starve.

An express way pure water hawker in Nigeria is about to sow all he’s worth into the life of his pastor.

Do you sometimes wonder why most of the least developed countries in the world are the most religious? Being a Nigerian citizen and observing how Nigerian Christians go about their Christianity with zero accountability makes me understand and begin to put two and two together.

If ever I get interested in studying theology and philosophy, I would research on the link between religion and low IQ, using Nigerian Christians as my case study.

We are so determined to keep scoring high in religious stupidity. We do it with so much enthusiasm, you would think stupidity would be a field event in the next Olympics, and we are preparing for gold.

What if Nigerians start building industries as much as they build churches? In the next 20years, unemployment would have been drastically reduced by 90%.

What if the rich Nigerians start funding entrepreneurs rather than give to already rich pastors, in the next 20years, Nigeria would have more than a million extra business owners, who would in turn be employers of labour, thereby further reducing the unemployment rate.

Many young Nigerians have wonderful business ideas with no money to execute them…. and I’m one of them. I’m yet to find any reliable Nigerian individual or multi-million company to partner, sponsor or fund my business idea. If I were a citizen of a saner country where the rich pay less tithes and invest more on the poor or upcoming, and also on human development, I probably would have been a billionaire by now.. In saner climes, rich people fund the young upcoming entrepreneurs. But in Nigeria, ideas are wasting. The rich give their extra cash to the rich.

Mark Zuckerberg had the idea of Facebook in his Harvard dormitory in his sophomore year. If he were Nigerian, a country very good at tithing, sowing seeds and killing dreams, maybe there would have been no Facebook. He probably would have sown his resources as seed faith in church, and would still be hoping for his overnight miracles.

Mediocrity is our best. We rank high in corruption, yet we are very religious. So much for a Christian country with an alarming poverty rate.

Sorry Nigerian tithe payers, considering the ever retrogressive state of Nigeria, God is NOT in Nigeria, and your tithing has made no difference. And God will stay away from Nigeria for as long as you think that paying money to your rich pastor is better than feeding and caring for the poor.
Wake  up  Nigerians, wake up Africans