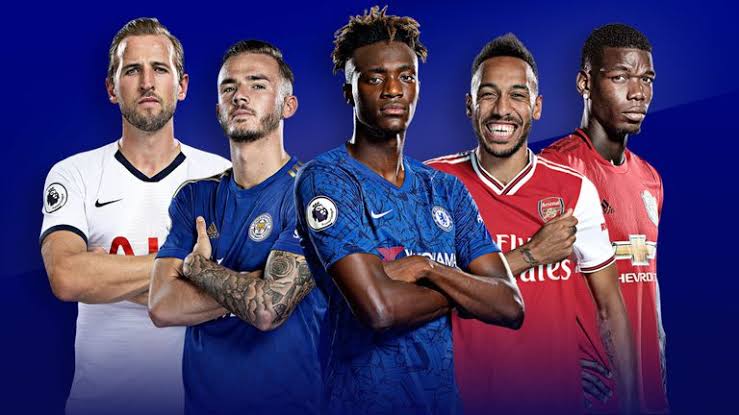 There are so many worthy candidates missing from this list of the best players in the Premier League for September and October that it could easily have been a top 40. Harry Kane’s new role as creator, Callum Wilson’s four goals, Virgil Van Dijk’s assured defending – and that’s without the lesser known talents like Emi Buendia and Adam Webster – all of them had an excellent past couple of months.
The problem with ranking individual players is much depends on who they play for, with and against. Plus, a successful team doesn’t always have one standout because their success is the result of work as a collective, hence the absence of a single Sheffield United player. But the show must go on, and here is a list ranking those footballers who shone.

It wasn’t so long ago that the idea of describing Raheem Sterling as a lethal finisher would have had you cast out of Football Town never to dance again, but by gosh the boy is pulsing with confidence, has clearly worked hard in training and is so regularly in position to score tap-ins and set up goals for others that he has become one of the deadliest forwards in world football. Rapid on the ball, smart off it, Sterling can go inside, outside or through defenders and is always in the right place to score or help the structure of the team. Although part of City’s two surprise defeats in the Premier League over the past couple of months, Sterling’s attacking threat never ceases.

Liverpool fans worried that their team might struggle to break down opponents without Philippe Coutinho can rest easy now that Alexander-Arnold has stepped up as chief play-maker. Opposition teams deliberately target and mark the right-back now – Manchester United’s entire game plan was built around it – but Alexander-Arnold simply moves into midfield, a midfielder covers him out wide, and he creates from inside the pitch instead.
Alexander-Arnold created 23 chances in September-October, more than any other player in the league. He’s a right-back who plays like a number 10. Liverpool have unearthed a genuine diamond.

James Maddison and Jamie Vardy tend to get the headlines but Wilfred Ndidi is the (surely) not-so-secret key to Leicester’s impressive start to the season. Ndidi patrols the midfield as the one in a 4-1-4-1 and from that position made the most interceptions (19) of any player, the most tackles (31) and the most recoveries of any outfield player (63). He is brilliant.


Cristiano Ronaldo has the ‘chop’, Ronaldinho has the ‘flip-flap’, and now Kevin De Bruyne has ‘that really teasing cross sent in early from wide right, curled around the first man to land at a striker’s feet directly in front of the goalkeeper to guarantee a goal’. The nickname can be decided later but that delightful trademark pass was one of the methods De Bruyne used to create 20 chances (second most in the league) and assist four goals (joint first) since our last Premier League ranking, also scoring one himself.

The anchor in a team which looks unbeatable. Fabinho provides steel, composure and guile in a position between Liverpool’s defence and midfield, lubricating fluid attacks and destroying opposition counters before they become a problem. Nothing stands out statistically because a lot of the good Fabinho does is off the ball, covering others and keeping the shape in order, but he did so well that Jurgen Klopp hailed the midfielder, who is apparently known as ‘Dyson’, as “unbelievable!” after the 2-1 win over Spurs. We all believe now, Mr Klopp.

Few centre-backs would fail to look good in a defence next to potential Ballon d’Or winner Virgil Van Dijk but Matip has improved immensely and is clearly a much better centre-back than when he first arrived at Liverpool. Was excellent against Sheffield United. Mistakes made by Joe Gomez and Dejan Lovren in recent matches have stood out like game-breaking glitches and show how used to Matip’s dependable presence Liverpool have become.

Like some sort of football Pokemon, evolution has taken hold of Rodri, who shall now be known by his new, more powerful form: Rodrigo. That’s what his shirt says, Opta says it too. It’s happened. Rodrigo has been superb for City since signing from Atletico Madrid and over the last two months has had to adapt to playing at centre-back in Pep Guardiola’s team, doing a decent job of it too. Has seamlessly fitted into the crucial ‘six’ role in City’s setup.

Wijnaldum is one of the Liverpool players nominated for the Ballon d’Or and one of the most complete midfielders in the league, capable of playing box-to-box, the holding role, or as creator, always moving to link play and capable of beating players with tricks or bursts of speed.
Wijnaldum doesn’t try to control the game, he just lets the ball run through him and makes the team better as a result. The way he keeps possession while surrounded in busy midfield situations allows Liverpool to get back in shape, move up the pitch and dominate opponents.

Half winger, half full-back, Pereira is heavily involved in everything Brendan Rodgers’ side do. Only three players had more than his 582 touches of the ball, with Pereira overlapping when possible to provide width and allow the wide midfielders inside the pitch. He isn’t just there to support though, as the two goals scored in six games shows.

After an ineffective performance at the start of the season against Manchester United, Abraham has swiftly grown into his role as Chelsea’s number nine and rewarded Frank Lampard’s faith with goals, including a hat-trick against Wolves. Abraham plays off the shoulder of the last man but is forever searching for space and often drops deeper to allow Chelsea’s other attackers to use the room he’s left behind, before turning up in the right place at the right time to finish a move. Four goals and an assist in six games.

Without Aubameyang’s goals (five in seven games), Arsenal could be in a whole other world of trouble/mediocrity and Unai Emery needs his star man to continue this run of form all season long. The only negative for Aubameyang is that attacking and scoring is all he really does, rarely contributing defensively or involved in link play in the final third. If he’s scoring goals this doesn’t matter but when those dry up, Emery needs more. Fortunately for Arsenal, the 22 league goals Aubameyang scored last season means his goalscoring streak is no fluke.

Maddison’s game has changed a little since last season, with the midfielder occasionally played on the left of Brendan Rodgers’ 4-1-4-1 and tending to keep the ball for longer and more often, trying fewer killer through-balls and instead getting into goal-scoring positions himself.
In recent weeks he has moved back to a central midfield position from where he has scored three goals in five games – a phenomenal return. A slight negative is that zero assists for a player whose greatest attribute has been his vision, creating chances for others, isn’t as good as probably should be.
Only four chances created shows Maddison is playing in a different way to last season – whether that is from Rodgers’ coaching or because opposition teams are focused on stopping him supplying the final pass is difficult to determine.

Tielemans captained Anderlecht while a teenager and so it should be no surprise that despite his young age of 22, he plays like a leader. Supremely gifted with the ball, Tielemans does a lot out of possession in the engine room of this impressive Leicester team. Two goals, one assist, 10 chances created, 35 recoveries – Tielemans is involved in everything.

The old commentator joke that Ederson ‘Could Do A Job Outfield’ feels less like a funny quip and more astute analysis the more time spent watching him. He really could. In addition to his phenomenal distribution, Ederson is also a reliable cross-gatherer and shot-stopper, pulling off some wonder saves against Crystal Palace and Aston Villa.

The master magician is still performing his greatest tricks on a weekly basis for Man City and is playing so well that it makes sense Pep Guardiola is struggling to integrate Phil Foden into the first team. Three goals in six games, including star performances against Crystal Palace and Aston Villa.

“It’s a great compliment when [Lionel] Messi votes for you,” said Mane of his Ballon d’Or nomination from the greatest player on earth of all time. “If you look at where I’ve come from, it shows I’ve come quite far.”
Very few would dispute that Mane is one of the most exciting forwards to watch in world football and Messi’s validation attests to that. He offers a bit of everything: blistering acceleration and pace, fantastic control, clever movement, those lovely chipped shots just over the raised hands of a beaten goalkeeper, and over the last couple of months Mane has scored three goals and created 14 chances while terrorising opposition defences. Brilliant against Newcastle and Leicester in particular.

Villa have three fantastic players in Tyrone Mings, John McGinn and Jack Grealish, the former only just missing out on this list. The rest of the Villa team provide a platform for the individual stars to perform and that setup is working well at the moment with Dean Smith’s side sitting 15th in the table.
Two goals, two assists and 17 chances created (the joint-third most) for Grealish in his six games doesn’t tell the full story – the way Villa’s captain keeps the ball and orchestrates play has been vital to the earning points this season, with star performances against Norwich and Brighton securing vital wins over the past couple of months.

With all the commotion in parliament these days, you may have missed the law passed which dictates anyone who likes football must love John McGinn. No-nonsense, does all the simple things well, runs all day from box-to-box, goes past players, makes tackles and scores goals (two over the last couple of months). Guaranteed to be linked with big money moves to clubs higher up the table than Aston Villa, and is absolutely good enough for it.

Runs as though launched from a cannon, has the upper body strength of a dodgem car and is finally producing a final ball and semi-accurate shot after many years of looking entirely one-dimensional. Traore was superb in Wolves’ 2-0 win over Man City and caused havoc down the right against Newcastle, with teammates constantly looking to him to create by blasting past opposition defenders as though a bowling ball through skittles.

Bournemouth’s left-back, a player almost nobody had heard of before signing last summer for a mystery transfer fee, has proven to be an astute purchase by Eddie Howe despite failing to impress last season. Over the previous six games he has helped his team keep two clean sheets while also providing two assists. Rico is a ‘modern’ full-back, capable of running the channel and doing as much in defence as attack and just because you aren’t sure he’s a real person doesn’t mean he’s not great.