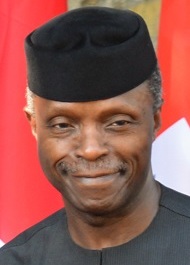 THE HUMILIATION OF THE VILLA FIEND

In September 2019 I tweeted the following to Vice President Yemi Osinbajo.


“Ambassador Ayo Oke, the former Director General of the Nigerian Intelligence Agency, took care of you. He paid your bills and protected you. He kept all your dirty little secrets. He gave you wise counsel and comforted you even when you shed tears and said you couldn’t take it anymore. All this yet you sold him down the river. Your fingers have finally been caught in the cooky jar and your benefactors and detractors have begun their work. They have demoted you, humiliated you, used you and dumped you. By the time they finish with you you will wish that you had never been born. Worse still Oke is no longer there to help you. Poor chap. Politics is a terrible thing when compared to the legal profession. This is especially so when you are a Professor of Law. At least you can go back to your pastoral work at Redeemed Christian Church of God when all else fails. My prayers are with you.”


A few days later I added the following, again in reference to the Vice President.


“If the short man doesn’t resign within six months they will soon be sending him to wash toilets. You came in on the same ticket, you sold your soul, you betrayed your people, your tribe, your region and your faith and you sucked your boss’ rectum for four years!
Look at what you got in return! Shame on you!”


Two months down the line both tweets have proved to be prophetic. They also signified the beginning of the end for our Pastor and Professor.


Over the last two months, despite all pretentions to the contrary, things have gone downhill for him and he appears to be a drowning man. It is only a matter of time before the final offensive and assault is unleashed against him by his traducers in the Presidency, the axe falls and he is finally thrown out.


I have been reliably informed that three names, all from the South West, have been penned down and are all being considered as his possible replacement. If this proves to be true I would not be the least bit surprised because those that ride on the back of the tiger always end up in its stomach.


The question that arises is what our reaction ought to be to the way the Vice President is being treated.


In this respect, insightful, sensible and refreshing are the words of Chief Yinka Odumakin, the erudite and courageous spokesman of Afenifere, when he said, on behalf of the Omo Karo Jires and the sons and daughters of Oduduwa, that


I am also encouraged by the fact that Baba Ayo Adebanjo, the number two man in Afenifere, one of the most reverred and respected elders and leaders in Nigeria and a man that I am prepared to follow into battle blindfolded, said that he had told Asiwaju Bola Tinubu and Vice President Osinbajo to “leave the APC”.


He said, “I don’t want to be dragged into the issue. What has he done that the South West has benefitted from? I am 91 years old and all I want is a better Nigeria. I have told Tinubu and Osinbajo to leave the APC”. (Sunday Vanguard, 10th November 2019).


These are wise words and faultless counsel. The consequences of not heeding them, at least for Osinbajo, are now manifest for all to see and sadly the chickens are coming home to roost.


It is Osinbajo’s turn to be exposed, grilled, humiliated, rubbished and dumped by the cabal today but, mark my words, it will be Tinubu’s tomorrow. They shall both reap the consequences of what they have sown and the choices they made.


I do not relish in the travails of Osinbajo and to a certain extent I pity him but what I will not do is defend him in the name of South Western or Southern solidarirty or anything else. In my view he simply does not deserve that kind of support and it irks and irritates me to no end when others try to give it to him.


For example when Professor Banji Akintoye, a notable elder and respected leader from the South West who has displayed immense fortitude in recent times and who I have immense respect for, says that Vice President Yemi Osinbajo should not be treated badly by President Muhammadu Buhari because he is a son of Oduduwa, I really do wonder.


When he says he is watching events unfold I wonder what he really believes he can do to save the Vice President from the consequences of his own shameless behaviour, cowardly disposition, ignoble foibles, treacherous actions and dishoborable choices.


Osinbajo willingly opted and eagerly chose to be an eager slave to Nigeria’s third and most dangerous Mahdi and to her last Amalekite King and such choices come with dire and divine consequences.


Permit me to qoute Professor Akintoye in full. He said,


“We are watching events unfold with keen interest. We are taking note of what is happening to them. Nobody should make the mistake of thinking that the “Yoruba” (his word) will be watching and allow their son to be degraded and dehumanised. It will be very difficult to advise Osinbajo because he holds a high office but my advice to him is to stick in there and let us see what they will do, then they will see what WE will do”. (Sunday Vanguard, 10th November 2019).


The question here is who are the “we”? Maybe Osinbajo’s shrinking circle and coterie of friends, family, loyalists and supporters but kindly leave the rest of us out. The rest of us do not wish to get involved and neither do we care!


With the greatest respect, on this particular matter Professor Akintoye certainly does not speak for me or for any of those that share my views. He may have his opinion and he is certainly entitled to it but I also have mine and so do millions of others.


In any case does he know the atrocities that Osinbajo has secretly committed against the South West and indeed the entire South behind closed doors over the last few years?


Does he know how many sons and daughters of Oduduwa that he is trying to bring to their knees and destroy?  Does he know what he did to Prince Deji Adeyanju, a fellow Oduduwan? Does he know the role he played in the arrest and prolonged detention of Omoyele Sowore, another son of the Anago?


Does he know how many sons and daughters of the South West Osinbajo is trying to send to jail for no just cause and for doing nothing wrong other than the fact that they refused to bend the knee and bow to his principal Muhammadu Buhari and simply because he wants to sacrifice them and please his northern masters?


Does he know the disdain and contempt he has shown Oduduwans, southerners and Christians, who he is meant to represent on the presidential ticket, over the last few years.


Sentiment ought to be left out of this. There is nothing worse than a traitor and Osinbajo is the greatest and biggest traitor to the Oduduwan and southern cause in Nigerian history.


A man that opted to align with and support those that oppposed the proscription of Boko Haram? A man that said we should pray for Fulani herdsmen as they rape and slaughter our wives and children?


A man that said the mass murder, genocide and ethnic cleansing of our people by the Fulani militias in Nigeria was exagerrated?


A man that travelled abroad and said all African countries are corrupt? A man that poured scorn and insults on all those that stood up to the tyranny and hegemony of his Fulani masters over the last four years?


A man that refused to see the President of CAN in his first 3 years in office as Vice President and only spoke to him through the Villa chaplain? A man that spent the better part of the last 4 years trying to weaken, discredit and destroy CAN?


A man that celebrated and encouraged the slaughter of IPOB members, including women and children? A man who stood by silently and turned a blind eye whilst his security aides beat up a journalist at the Presidential Villa and smashed his camera?


A man that sold his soul to the devil and served the Fulani cabal to the best of his ability. A man that has sat by silently as the Judiciary, Natiional Assembly and all our reverred institutions and lesders in the south and Middle Belt are rubbished?


A man that has told all manner of lies against President Olusegun Obasanjo, President Goodluck Jonathan, Vice President Atiku Abubakar and countless other opposition leaders brandishing them as corrupt and unfit for public office whilst he serves the most corrupt, racist, vicious,, sectional and oppressive Government in our entire history?


A man that insulted Afenifere leaders and those that called for restructuring and desctibed them as jobless people that are just seeking for relevamce?  A man that insulted his own in-law, Chief Obafemi Awolowo, by saying he was wrong when he described Nigeria as  a mere geograohical expression?


A man that has betrayed his owm mentor Asiwaju Bola Tinubu? A man that that used his  Redeemrd Church and his spiritual dather to split Christendom and help put in place an eviil Anti-Christ Governmrnt.


I have no sympathy for Osinbanjo and I do not think any southermer, Middle Belter or Christian that is in his right mind oight to either.


He is a disgrace to Oduduwa, to the south, to the Church, to Christendom and to the God that He claims to love and serve.  Worse of all he is a worthless coward! A man that considers his political career as being more important than the life of a believer.


A man that said nothing when  a lady Pastor from his own Redeemed Church was murderd by islamists and jihadists in cold bllod right on his doorstep in Abuja?
A man that lacks courage, wisdom, humanity, decency, charity and compassion.


Is that realy a man or is he just a whimp? Is that a servant of God? Is that a believer?


I say to hell with such a man. He dies not deserve any  support or sympathy from any quarter. He entered into a demonic Faustian pact gladly and willingly in 2015 when he joined Buhari. We warnrd him but he woild not listen. He wined and dined with the devil and now the devil has come for his soul.


I say let him perish with it. No-one can resist the judgement of God and it will take a lot more than Professor  Akintoye to save him from that.


Those that speak for him in tte name of Oduduwa solidarity  would do well to do their homework about this man. They should speak for themselves and  not me.


Osinbajo made his bed and he should be allowed to lie in it. If he had any decency he would have resigned by now but he lacks self-respect and honor so he can never do so.